Chelsea are back in action at home to West Ham United in the Premier League on Sunday, as they look to bounce back from their recent humbling defeat at the hands of rivals Arsenal at Stamford Bridge on Wednesday evening.

Just days earlier the Blues had secured their place in this season’s FA Cup final, although any goodwill from that Wembley showing seemingly evaporated in midweek, with Thomas Tuchel left reeling by his side’s shoddy defensive display against the top-four chasing Gunners.

With changes expected from that hefty loss, here’s a look at how we think the west London outfit will line up this weekend… 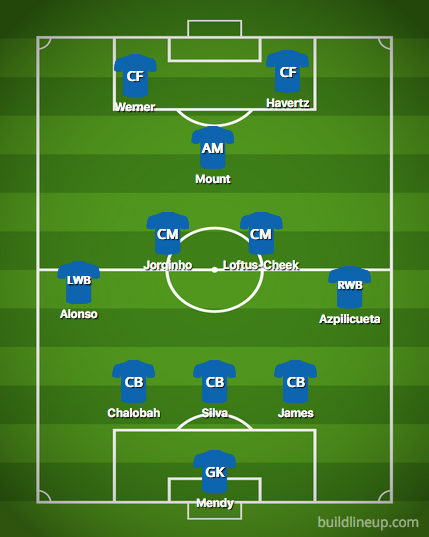 With Tuchel revealing in his pre-match press conference that there are no fresh injury concerns – with both Antonio Rudiger and Mateo Kovacic once again set to be unavailable for the visit of the Hammers having missed Wednesday’s defeat – any alterations this weekend are likely to be purely tactical, with our prediction being that the German will make four changes for the encounter with David Moyes’ side.

In goal, Edouard Mendy retains his place despite another shaky showing last time out – the Senegal stopper registering just a 5.4 match rating – with it being the men in front of him that are likely to change, with both Malang Sarr and Andreas Christensen seemingly set to drop out after coming under fire for their error-strewn performances.

That will see £95k-per-week defender Thiago Silva – who has been dubbed “ridiculous” for his continued stunning form by Rio Ferdinand – return in the centre of the back three, while Trevoh Chalobah could be thrust in from the cold, having not featured in the league since the win over Newcastle last month.

England international Reece James should round off that backline – with Marcos Alonso and Cesar Azpilicueta the only real options at wing-back – while in midfield Euro 2020 winner Jorginho should come in for N’Golo Kante alongside Ruben Loftus-Cheek.

Lastly, in attack, a resurgent Timo Werner – who has netted four goals in his last four games – should keep his place alongside the club’s chief creator Mason Mount, with Kai Havertz set to return after his recent rest in the place of the struggling Romelu Lukaku.

AND in other news, Tuchel must axe £100k-p/w Chelsea star who “can’t run” as fresh contract claims emerge – opinion