Chelsea return to Premier League action on Wednesday evening with a mouthwatering clash against London rivals Arsenal, having been on FA Cup semi-final duty against Crystal Palace at the weekend.

That 2-0 Wembley triumph on Sunday catapulted Thomas Tuchel’s side into a third successive showpiece in the competition, with that now their only chance of silverware this season following their recent Champions League exit at the hands of 13-time winners, Real Madrid.

As for the top-flight, a win over the Gunners – who they beat back in August at the Emirates – would only further strengthen their stranglehold on third spot, while also helping to dent their opponents’ own top-four hopes in the process.

Ahead of this eye-catching midweek meeting at Stamford Bridge, here’s a look at how the Blues could well lineup against Mikel Arteta’s side… 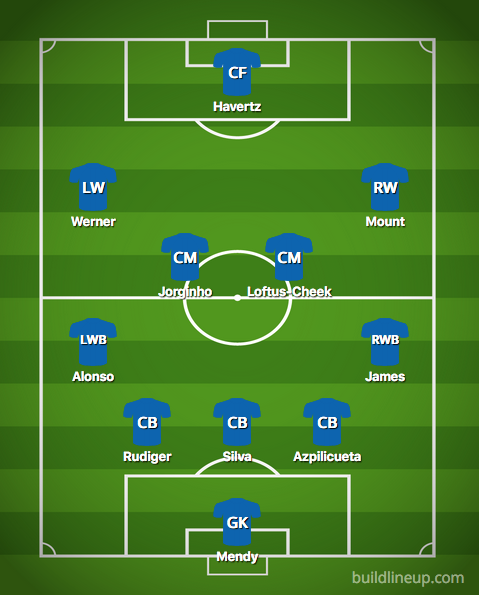 Tuchel revealed in his pre-match press conference that Mateo Kovacic – who limped off early on against the Eagles – is set to be absent for at least the next two weeks, while Callum Hudson-Odoi and Ben Chilwell both remain on the sidelines, with the Croatian midfielder set to be one of two changes that the Blues boss could make this evening.

The backline arguably picks itself at present, with the potential only change likely to be that of veteran defender Thiago Silva in the place of the seemingly Barcelona-bound Andreas Christensen, with the Brazilian having only been a late substitute at the weekend.

That should see Edouard Mendy keep his place in goal, while the other two centre-back roles will go to Antonio Rudiger and Cesar Azpilicueta, with Marcos Alonso and Reece James – who did start on the right of the back three on Sunday – likely to slot in at wing-back.

In midfield, Kovacic’s absence should see a starting berth handed out to Ruben Loftus-Cheek, the ten-cap international having netted a stunning effort to open the scoring against Patrick Vieira’s side, with his performance ultimately dubbed “excellent” by his manager post-match.

The 26-year-old shone against a side where he spent a season on loan during the 2017/18 campaign, enjoying a 100% take-on success and winning five duels, as per Squawka, with the £18m-rated star – who has been dubbed a “fantastic specimen” by Rio Ferdinand – having earnt a start ahead of a struggling N’Golo Kante.

He will be partnered in midfield by Jorginho – who has been linked with an exit this summer – while in attack the dynamic trio of Mason Mount, Kai Havertz and Timo Werner will retain their places, with Tuchel insisting that the latter man could have enjoyed something of a “turnaround” in fortunes after his recent improved form.

AND in other news, Chelsea eye Ziyech upgrade in £31.5m-rated gem who gives defenders a “sleepless night”