Werner recalled in Chelsea predicted XI to take on Brentford

While early-season hopes of a title challenge have been well and truly quashed, there is certainly still a lot to play for in the remaining month or two of the season for Chelsea, with Thomas Tuchel’s side still competing on three fronts with the hopes of adding to last season’s Champions League crown.

Domestically, an FA Cup semi-final clash with Crystal Palace awaits, while in the Premier League the main remit will be not to relinquish third spot to a relentless Arsenal side below, with ensuring their place as the best of the rest behind title contenders Liverpool and Manchester City seemingly the main aim.

After the brief halt to proceedings due to the international break, the Blues get back underway at home to Brentford on Saturday, with the Stamford Bridge outfit looking to secure a third win of the season against their west London rivals.

Ahead of that meeting, Tuchel revealed in his pre-match press conference that he has an almost fully fit squad at his disposal, with academy graduate Callum Hudson-Odoi the only notable injury concern, alongside long-term absentee, Ben Chilwell.

With that in mind, here is how The Shedender predicts the hosts to line up against Thomas Frank’s side on Saturday… 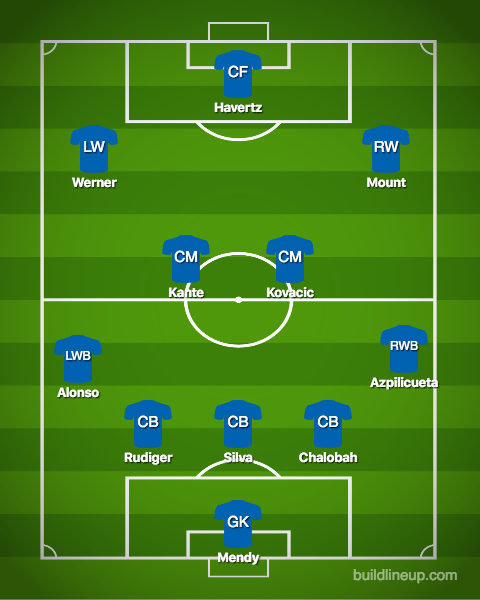 We predict that Tuchel will make five changes from the side that ran out 2-0 winners over Middlesborough prior to the international break, with the former Paris Saint-Germain boss likely to revert back to his preferred 5-2-3 formation in order to match up the opposition, having used a flat back four in the FA Cup victory over Chris Wilder’s side two weeks ago.

In goal, Edouard Mendy will almost certainly keep his place having enjoyed another outstanding campaign in English football, the former Rennes man having also notably produced a heroic display in the reverse fixture at the Brentford Community Stadium, making six saves and achieving an impressive 8.5 match rating, as per SofaScore – with the performance labelled “absolutely brilliant” by Sky Sports pundit, Gary Neville.

In defence, we expect reported Barcelona target Cesar Azpilicueta – who Tuchel admitted has a “very high probability” of staying at the club – to slot in once again at right wing-back, with it perhaps a game too soon for the returning Reece James, who has featured just once in 2022 so far this season.

Occupying the three centre-back roles, we expect Trevoh Chalobah to return to the side on the right, while Germany international Antonio Rudiger – who has also been linked with a move to the Nou Camp – should slot into his usual berth on the left of the three. Commanding the centre of defence will likely be veteran Brazilian Thiago Silva, the 37-year-old having returned a day earlier than expected from international duty and thus “will be available for tomorrow”, according to his manager.

With former Leicester City man Ben Chilwell still stuck on the sidelines, the left-wing back role is expected to be handed to Marcos Alonso, with the £13.5m-rated Spaniard having sat out the victory at the Riverside Stadium.

In central midfield, Mateo Kovacic is expected to retain his place, although diminutive Frenchman N’Golo Kante would be a wise choice to partner him, in favour of teammate Jorginho. The 30-year-old endured a miserable time of it on international duty as Italy were dumped out of the World Cup playoffs by minnows North Macedonia, with the former Macedonia man coming under fire after viral footage showed him being easily bypassed by opposition midfielder, Enis Bardhi.

In Kante, the Blues have a much more robust and dynamic presence in midfield to counter the high energy style of the visitors, with the World Cup winner averaging two tackles per game and 0.9 interceptions, as per SofaScore.

His return will likely see Ruben Loftus-Cheek drop out, with the former Crystal Palace loanee one of the notable casualties from the expected change in system, while in attack we predict that Mason Mount – who club legend John Terry this week tipped to be the future club captain – will be the only forward player to keep his place.

With the £28.8m-rated Hakim Ziyech, Romelu Lukaku and Christian Pulisic all expected to drop out – with the American international’s involvement in the squad still uncertain – the final two attacking slots are expected to be taken by German duo, Kai Havertz and Timo Werner.

The former has thrived in a false nine role of late, netting four goals in his last three league games, while the latter man is coming off the back of another confidence-boosting stint with the German national side, notably scoring in the 2-0 win over Israel last week.

While he has been linked with the exit door and recently admitted that perhaps he is “better suited” to the style of play under Hansi Flick, his sheer pace and willingness to run the channels – something which has drawn comparisons to Jamie Vardy from club icon Joe Cole – may seem him well suited to exploit the space in behind Brentford’s three-man defence.

Despite not being a season-defining game, a positive performance could help build momentum for the weeks to come.

AND in other news, Tuchel must shun “breathtaking” £36m-rated “phenomenon” to aid 13 G/A Chelsea star