Chelsea return to action against an impressive Crystal Palace side this weekend, the two sides going head-to-head on Sunday in what promises to be an enthralling FA Cup semi-final showdown.

The Blues head into the game off the back of their midweek Champions League disappointment, while they will also be looking to avenge their recent Wembley failings, having suffered defeat in the Carabao Cup earlier this season at the hands of Liverpool, as well as in two successive FA Cup showpieces – losing to Arsenal in 2020 and Leicester City in 2021.

Bidding to reach a third straight final, here’s how we think Thomas Tuchel’s side will line up against the Eagles… 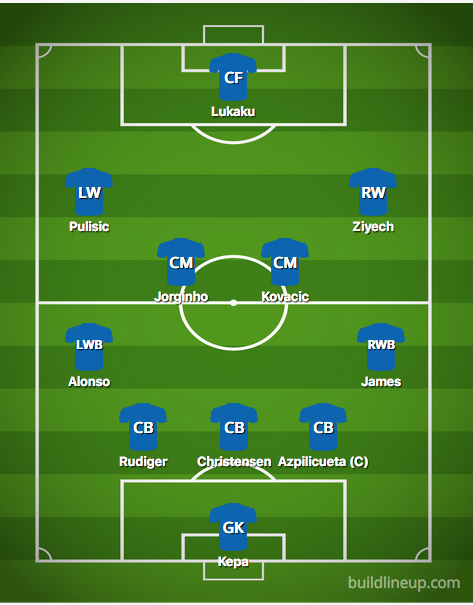 With Thomas Tuchel revealing he is expected to have an almost fully fit squad at his disposal – aside from long-term absentees Ben Chilwell and Callum Hudson-Odoi – we anticipate that the German will likely shuffle his pack, albeit while still remaining competitive, making six changes from the side that played out 120 minutes in Madrid on Tuesday night.

In goal, Kepa Arrizabalaga could well return in place of Edouard Mendy – despite his substitution horror show on his last Wembley outing – having largely been deployed in cup competitions under Tuchel, featuring in two earlier rounds in the FA Cup thus far.

As for the back five, the absence of Chilwell should see Marcos Alonso keep his place, while on other the flank we expect Reece James – who has been dubbed “phenomenal” by talkSPORT pundit Ally McCoist – to return to his usual right wing-back berth, having slotted into the back three in the Bernabeu.

Alongside Antonio Rudiger in that central trio could well be reported Barcelona target Andreas Christensen and skipper Cesar Azpilicueta, with fellow veteran Thiago Silva likely needing a rest after his midweek exertion.

Euro 2020 winner Jorginho slots in in place of N’Golo Kante alongside Mateo Kovacic, while there are three changes in attack, with Christian Pulisic, Hakim Ziyech and Romelu Lukaku rotating in for Mason Mount, Timo Werner and Kai Havertz.

Lukaku is now back in training and could look to extend his excellent FA Cup scoring record, the £76.5m-rated Belgian powerhouse having scored 16 times in the completion since his debut a decade ago – only Sergio Aguero (20) has netted more in that time.