Journalist Simon Johnson has given his views on Edouard Mendy’s costly error during Wednesday’s heavy 3-1 defeat to Real Madrid at Stamford Bridge.

Despite having been so impressive since his £22m move from Rennes back in the summer of 2020, the Senegalese stopper – dubbed “one of Chelsea’s best ever signings” by talkSPORT pundit Tony Cascarino – made the headlines for all the wrong reasons in midweek, having gifted the 13-time winners a goal just seconds after the interval.

With the game finely poised at 2-1 after a pulsating first half, the 29-year-old inexplicably teed up Karim Benzema following a tame attempted pass to teammate Antonio Rudiger, with the prolific Frenchman duly slotting home into the empty net to wrap up his second successive hat-trick in the competition.

Taking to Twitter following that bizarre blunder, Johnson was heavily critical of the Blues’ stopper’s “terrible” decision making in that moment, while he also referenced the AFCON winner’s dismal showing against West Ham United earlier this season, in which the £28.8m-rated man was at fault for two of the Hammers’ goals. 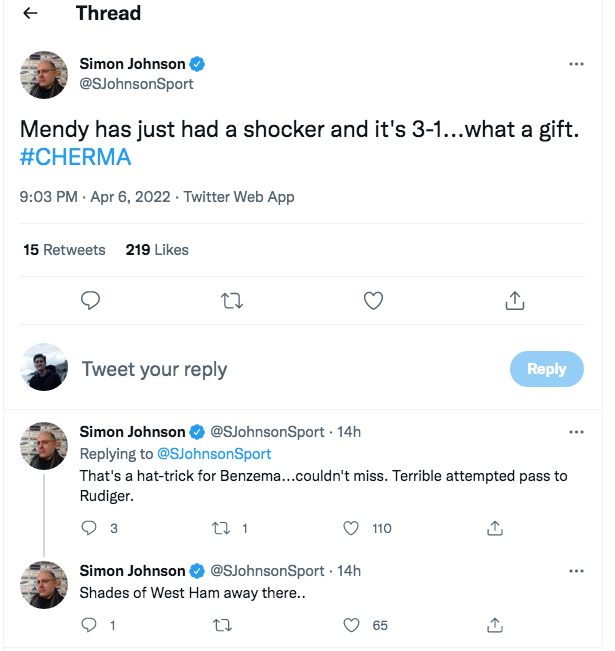 It’s hard to disagree with Johnson on what was a simply head-scratching, albeit uncharacteristic, blunder from the £52k-per-week man, with that mistake potentially proving pivotal in the outcome of the tie, with Thomas Tuchel’s side now needing to overturn a two-goal deficit in the Santiago Bernabeu next week.

The hosts had got themselves back into the game through Kai Havertz after Benzema’s quick-fire double, although Mendy’s misfortune just after the break appeared something of a sucker punch, with the west London side now having a “mountain to climb” in Madrid, according to Karen Carney.

Mendy – who was also criticised by club legend Joe Cole – has rarely put a foot wrong over the past two seasons, however, with it perhaps unfair to heap too much blame on his shoulders alone, a sentiment echoed by opposition stopper, Thibaut Courtois.